Vitamin D is a nuclear steroid hormone that is essential for calcium homeostasis, cardiovascular health, optimal glucose metabolism and effective functioning of the immune system [1]. It is also considered as a neurosteroid with distinct roles in the brain [2, 3, 4]. Low levels of vitamin D have been implicated in several neurological disorders including multiple sclerosis [5], Alzheimer and Parkinson disorders [6] as well as epilepsy [7].

Vitamin D also seems to be involved in mood regulation and mental health. Seasonal affective disorder, for example, is regarded as reflecting seasonal fluctuation in vitamin D [8]. There is evidence supporting suboptimal vitamin D levels being associated with depression [9, 10]. Prenatal and early childhood vitamin D deficiency has been associated with increased risk for autistic spectrum disorders (ASD) [11, 12, 13] and schizophrenia [14]. Neurological and psychiatric disorders with a vitamin D link are also known to be associated with higher prevalence of alexithymia [15-19] a personality trait characterized by impaired ability to experience, differentiate and verbalize emotional experiences [20].

Although both vitamin D deficiency and alexithymia were described as a correlate of a variety of pathological conditions, their specific interrelation has not yet been studied. We therefore designed a study to assess this. To avoid possible influence of pathological factors we examined young healthy adults with no history of chronic illness, neurological or psychiatric disorders.

Based on an advertisement placed on notice boards at the University of Pécs, healthy, right-handed Caucasian university students without history of substance abuse, chronic illnesses, neurological and psychiatric disorders, aged between 19 and 30 were recruited. Out of the 91 subjects contacted our recruitment team two subjects were excluded based on self-reported mental health problems identified by our lifestyle and health questionnaire (one subject with a known personality disorder and another one with symptoms of clinical depression). The final sample group thus comprised 89 subjects (59 females and 30 males). Mean age was 23.1 years (SD = 2.1). No subject was taking vitamin D supplements. The study was carried out during the winter of 2011-2012 (blood samples were taken between 07.11.2011 and 16.01.2012). The study was approved by the Local Ethics Committee and all participants gave written informed consent prior to participating in the study.

Alexithymia was measured by the Hungarian version of the 20 item Toronto Alexithymia Scale (TAS-20) [21]. TAS-20 total score range between 0 and 100. Based on TAS-20 scores the following subgroups were defined: non-alexithymia (≤51), possible alexithymia (52-60) and alexithymia (≥61) [22]. TAS-20 is considered to exhibit good internal consistency and test-retest reliability [23]. In our study Cronbach's α was 0.79 indicating acceptable reliability.

Actual level of depression was measured by the Hungarian version of Beck Depression Inventory (BDI) [24, 25] while actual level of anxiety was measured by the Hungarian version of Spielberger State Anxiety Inventory (STAIS) [26, 27]. Cronbach's α was 0.80 and 0.92 for BDI and 0.92 for STAIS, respectively. To assess handedness we used the Edinburgh Handedness Inventory (EDI) [28]. Subjects also completed an exploratory questionnaire about lifestyle factors, mental and physical health.

Fasting blood samples were analyzed for serum 25-hydroxivitamin D (25(OH)D) with an automated electrochemiluminescence immunoassay measuring both vitamin D3 and D2. Five ml venous blood sample was collected from each subject using a Vacutainer plain tube which after complete blood coagulation was centrifuged at 3000 RPM (rounds per minute, approximately 1500g) for 10 minutes to separate serum from the clot. Vitamin D levels were measured on Elecsys 2010 analyzer with Elecsys Vitamin D Total kit (Roche Diagnostics) by the accredited diagnostic laboratory of Institute of Laboratory Medicine, University of Pécs, Faculty of Medicine.

Statistical analyses were performed using SPSS 20.0 software package (SPSS Inc, Chicago, IL). As tests of normality showed that all psychological variables (TAS-20, BDI and STAIS scores) significantly differ from normal distribution, non-parametric Spearman rank correlation tests were used for calculating correlations. First, correlation coefficient was calculated between TAS-20 scores and 25(OH)D levels. To control for possible confounders a multiple linear regression analysis was performed where TAS-20 was defined as dependent while 25(OH)D level, age and gender as independent variables. In a next step BDI and STAS scores were entered as additional independent variables in the model. All assumptions of multiple linear regression were satisfied, as judged by testing for linearity, normality assumptions of the residues, outliers, independence of errors, homoscedasticity and multi-collinearity [29]. 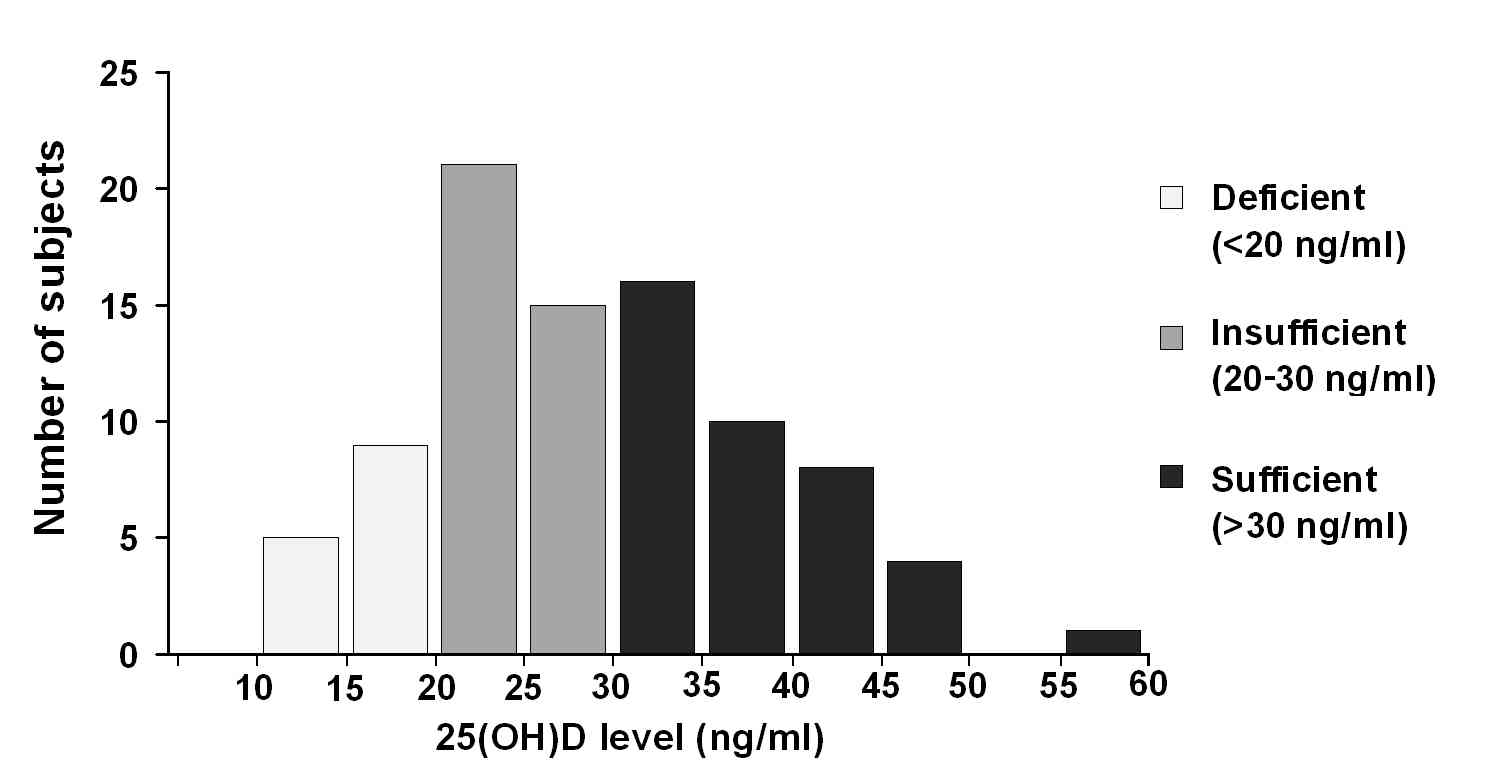 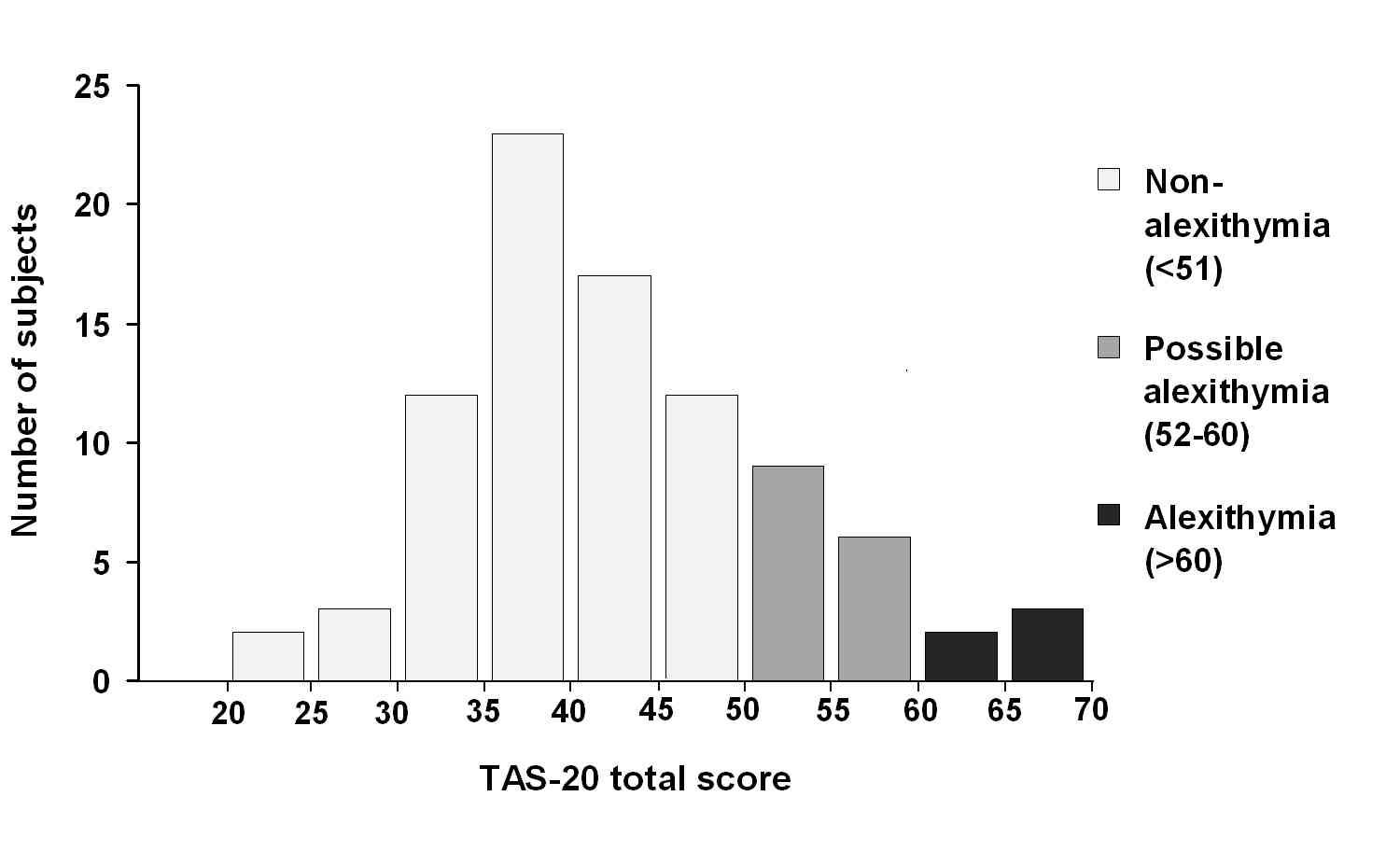 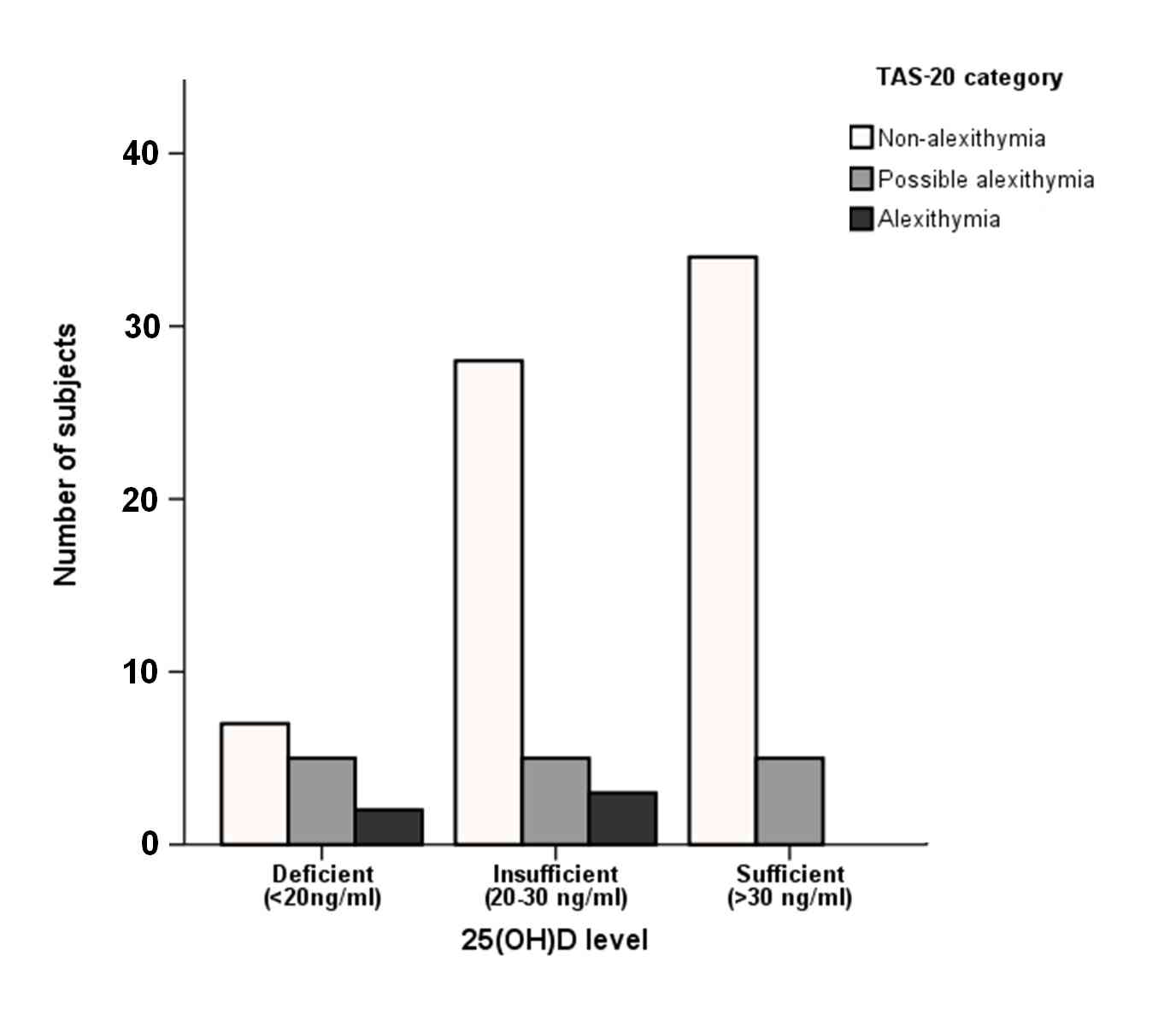 Figure 3.
Distribution of subjects according to the three TAS-20 and the three vitamin D categories. 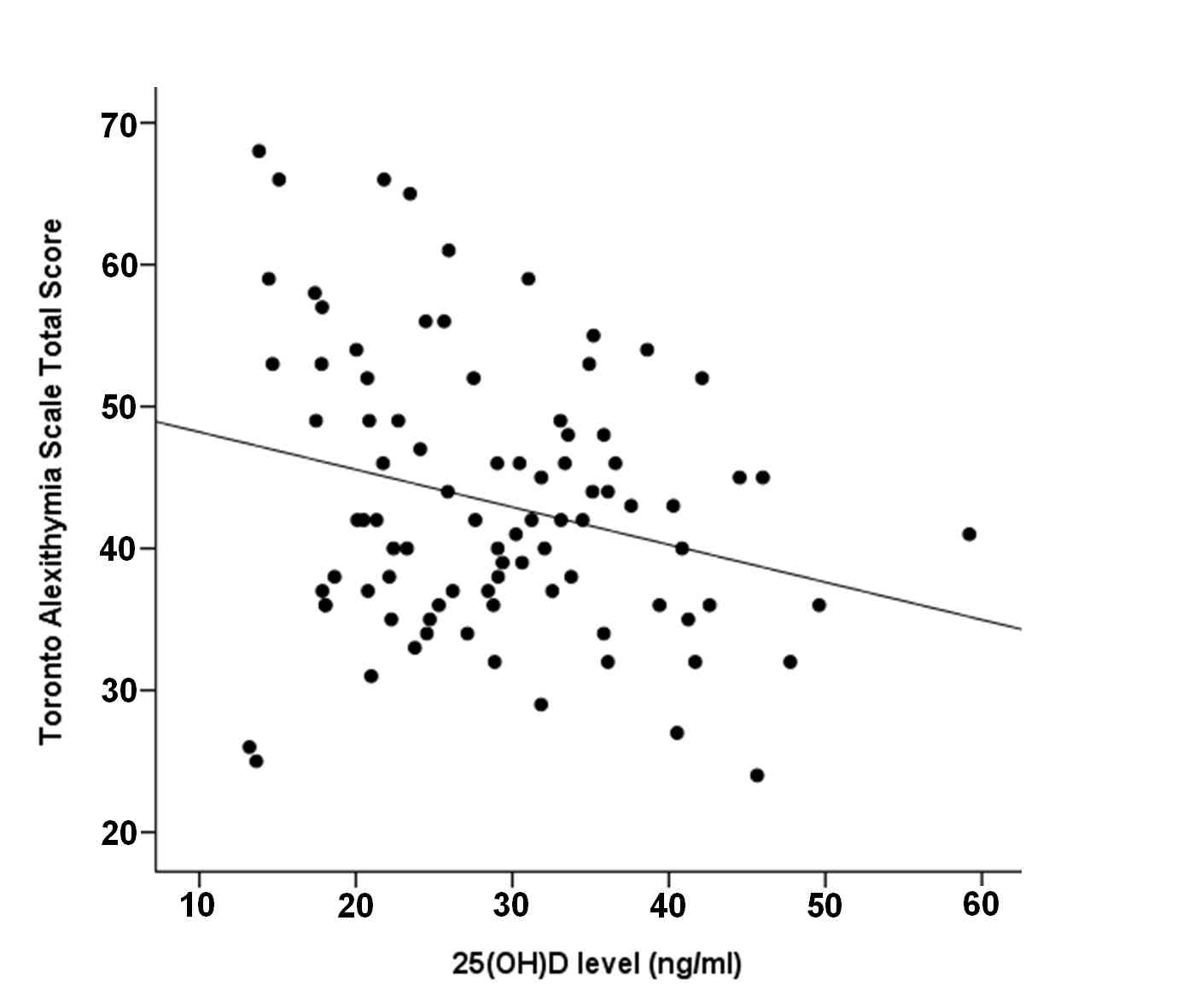 Vitamin D level is primarily determined by exposure to sunlight and secondarily by factors influencing vitamin D synthesis in the body. Wintertime vitamin D level was shown to be associated with genetic factors [32, 33]. Our finding of a correlation between the actual level of vitamin D and alexithymia may be surprising given that previous studies generally did not find a gradual association between vitamin D level and psychological functions in cross-sectional studies [34]. However longitudinal studies assessing maternal, perinatal and early childhood vitamin D markers did found a link between low vitamin D levels and an increased risk for psychiatric conditions manifesting in later life such as autism and schizophrenia [11, 13, 14]. An acute effect of vitamin D on the level of alexithymia (or an opposite causal relationship) in the present study cannot be entirely excluded but we deem it unlikely given that alexithymia is considered as a stable personality trait [35]. Instead we suggest that the correlation between alexithymia and vitamin D can be regarded as a trait-like relationship between two conditions which are rather stable longitudinally (i.e. alexithymia and wintertime vitamin D level) [36, 37]. Such a correlation may be interpreted as a reflection of early life vitamin D deficiency determining life-long alexithymia. This seems to be plausible given that alexithymia appears to be highly comorbid with autism [38] a pervasive developmental spectrum disorder that is also thought to be related to low perinatal vitamin D levels [11]. Furthermore, higher incidence of alexithymia in ASD may be responsible for emotional impairments previously associated with autism itself [39, 40, 41].

Generally a distinction is made between primary and secondary alexithymia. The former is regarded as a stable personality trait while the latter is more transient occurring in response to severe and chronic medical illness [42]. To minimize secondary alexithymia here we included young adults free of neurologic, psychiatric or other chronic disorders based on our questionnaires.

Studies in elderly indicate cognitive decline and depression to be associated with actual levels of vitamin D [9, 43]. Baseline vitamin D levels in elderly also predicted decline in cognition within a few years [44]. Autism and schizophrenia, at the same time, are generally related to perinatal and early childhood vitamin D deficiency [13, 14]. There is substantial controversy as to whether middle-life depression is related to vitamin D [34]. Overall, the association between actual vitamin D levels and mental functions seems to be more pronounced with advancing age. Here we report a correlation between actual levels of vitamin D and alexithymia in young healthy university students indicating that an association between disturbed emotional processing and low vitamin D levels is already present in young healthy adults.