Magnesium plays an essential role in several enzymatic reactions. Its deficiency is known to be widespread and has been associated with a variety of pathological conditions characterized by chronic inflammation and/or oxidative stress. The connection between the metabolism of glucose and magnesium at the cell level is well-established. We hypothesize that magnesium deficiency in chronic conditions is primarily due to Western type carbohydrate based metabolism. In previous case studies we have shown that magnesium levels are normal on the paleolithic ketogenic diet. Here we assessed magnesium levels in a larger sample (n=50) to address whether the paleolithic ketogenic diet is able to ensure normal blood magnesium levels.

To assess magnesium levels in patients and healthy controls on the paleolithic ketogenic diet in a larger sample, we retrospectively analysed laboratory data obtained from 50 patients/subjects who were following the diet and were also not taking magnesium or other supplements. Correlation calculation was performed between magnesium and glucose as well as between magnesium and glycated hemoglobin levels.

Our results indicate that the paleolithic ketogenic diet ensures normal magnesium levels in various pathological conditions as well as in healthy subjects. We believe that the high prevalence of magnesium deficiency reported earlier for a variety of chronic conditions is correlated with carbohydrate-based Western-type nutrition rather than that of the chronic condition itself. We discuss underlying mechanisms.

Magnesium is an essential element that is involved in more than 300 enzymatic reactions (1). In the body all enzymes using ATP require magnesium for substrate formation (1). Magnesium deficiency is reported to be widespread and a low level of magnesium was found to be associated with pathologic conditions including diabetes, cardiovascular disease, atherosclerosis (1,2) and autoimmune diseases (3). Awareness about magnesium deficiency has increased over the past few decades in parallel with an accumulation of studies on the role of magnesium deficiency in pathological conditions. Cross-sectional studies consistently found an inverse relation between magnesium levels and disease parameters such as glycemic measures (4), blood pressure (4), inflammatory markers (5) and disease-associated complications (6). Epidemiological studies also indicate an inverse association between dietary intake of magnesium and type 2 diabetes (7) as well as metabolic syndrome (8). At the same time, studies aimed at studying the effects of magnesium supplementation consistently found no clinically meaningful benefit in glycemic control of type 2 diabetes (9), hypertension (10) and in pregnancy (11). A Cochrane meta-analysis did not even find an effect in preventing muscle cramps, one of the most well-known indications of magnesium supplementation (12).

We reviewed the medical records of our patients seen between 2013 and 2016 and selected those patients who (1) after an initial medical consultation started the paleolithic ketogenic diet (2) and who were then followed up either personally, by e-mail or phone contact, enabling ascertainment of dietary adherence, and (3) who also had a laboratory follow-up including simultaneous blood testing for glucose and/or glycated hemoglobin, magnesium and urinary testing for ketones. If several laboratory measurements were available for the same patient we used the most recent one. Laboratory work-up was carried out in accredited laboratories in Hungary.

Sixty-seven patients were identified matching the above three criteria. Out of these patients we excluded ten patients who had a negative urinary ketone test, which is indicative of insufficient dietary adherence at the time of the laboratory test. Also excluded were twelve patients who were receiving chemotherapy or other medication at the time of laboratory testing. We additionally included five healthy subjects, who were relatives of the patients, and who fulfilled the inclusion criteria. The final sample thus contained 45 patients and five healthy subjects. Among the included patients/subjects there were 20 males and 30 females. Patient/subject characteristics are displayed in Table 1. Normal range of serum magnesium was defined as between 0.75 and 1.06 mmol/l. Serum levels of magnesium, glucose and HbA1c were determined by standard laboratory tests.

Typically, dietary therapy was applied following the use of conventional treatments such as surgery, drug treatment, immunomodulatory treatment or chemotherapy. Although, at the time of the laboratory test used for the present study, all patients applied the paleolithic ketogenic diet as a stand-alone therapy.

The idea of an animal-fat meat based diet being evolutionary adapted for humans was originally proposed by gastroenterologist Voegtlin (13). Later Eaton and Conner (23) as well as Lindeberg (24) made significant contributions to the concept of evolutionary nutrition. The term “Paleolithic diet” was introduced by Cordain (25). In the literature there are a few short-   term intervention studies (26-29) and two long-term intervention studies  (30,31) of the paleolithic diet in diabetes and the metabolic syndrome. The paleolithic ketogenic diet that we use in the rehabilitation of patients with chronic diseases is close to the diet proposed by Voegtlin (13). The paleolithic ketogenic diet consists of at least 70% animal-based food (in volume) with a fat:protein ratio of approximately 2:1 (in grams). Fatty red meats were given precedence over lean meats. We also recommended a regular intake of offal from cattle and pork including liver, brain and marrow. Milk, dairy, cereals, grains, oilseeds, legumes, nightshades, all plant oils (including coconut and olive oil), refined sugars, artificial sweeteners and foods with additives were not allowed. Black tea and herbal tea were restricted but coffee was allowed in moderation. Patients were allowed to use small amounts of honey for sweetening. No vitamin or mineral supplements (including magnesium) were used. Six patients (pat #6, pat #21, pat #29, pat #32, pat #33, pat #34) were on a full meat-fat diet meaning that these patient did not consume vegetables, fruits and honey at all.

Pearson correlation was calculated to assess the relation between serum glucose and magnesium. Comparison of magnesium levels between males and females was carried out using Mann-Whitney U test.

Patients/subjects included in the study had been following the diet for a median of 2.75 months (range: 0.2-32 months). In addition to urinary ketones, we reviewed glucose, triglyceride, cholesterol and LDL cholesterol levels as additional indicators of dietary adherence. As expected in patients on the paleolithic ketogenic diet, triglyceride levels were normal (mean±SD: 1.4±0.7) while cholesterol (mean±SD: 7.5±4) and LDL cholesterol (mean±SD: 5±3.4) were mildly elevated. In two patients with high grade brain tumors, cholesterol levels were extremely elevated. Except for a few patients with diabetes, glucose levels (mean±SD: 5.1±1.4) and HbA1C levels (mean±SD: 5.5±1.3) were low. A similar pattern of laboratory parameters was seen in our previous case studies with the paleolithic ketogenic diet (14-21) and may be regarded as indicating adequate dietary adherence.

Dashes indicate that a given parameter was not measured.

Sample daily menu on a full meat-fat paleolithic ketogenic diet. Daily intake of magnesium was estimated to be 64 mg being much lower than the recommended intake. Patients on the paleolithic ketogenic diet typically eat only two times a day. Estimation of magnesium content of food items was based on the USDA Food Composition Databases. Meat, meat products and eggs were preferably obtained from organic sources and therefore may contain more magnesium than estimated from the USDA database. 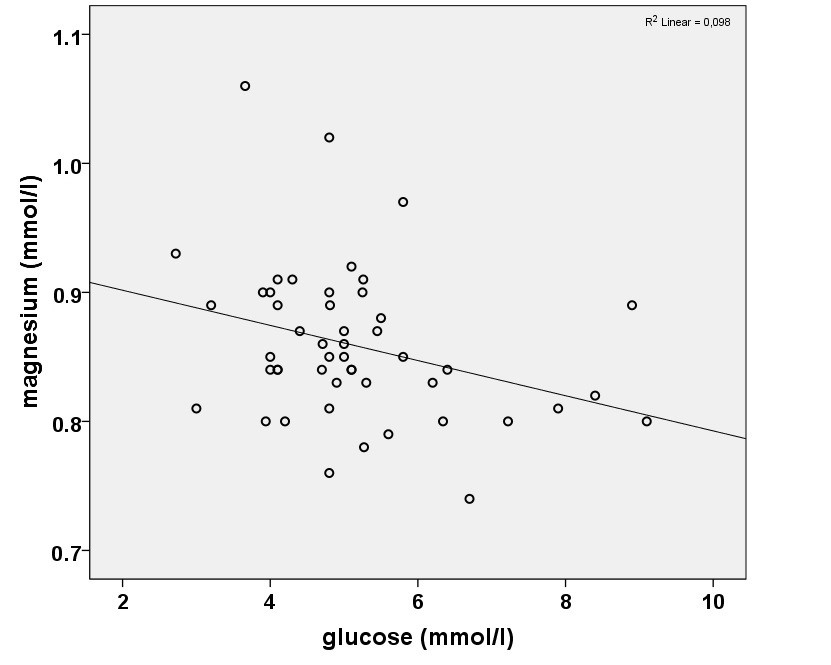 Fig.1. Scatterplot representing the correlation between the blood level of magnesium and glucose.

Our results indicate that both patients and healthy individuals on the paleolithic ketogenic diet exhibit normal serum levels of magnesium. By comparison, magnesium deficiency is 15-45 % in the diabetic population (2), is 66% among those with metabolic syndrome (2) and is 13-88% in patients with inflammatory bowel syndrome (3). As far as we know, previous studies with the paleolithic diet have not assessed serum magnesium levels.

In our study, patients with diverse diseases as well as healthy individuals exhibited similar magnesium levels indicating that preexisting disease itself does not result in low magnesium levels. Magnesium levels were normal in the six patients who had been following the paleolithic ketogenic diet for only five to seven days. It seems that low magnesium levels consistently described in previous clinical studies are related to Western type nutrition and/or elevated carbohydrate load. In the present study we excluded patients taking medicines in order to exclude the possible or known magnesium lowering effect of medicines through increased excretion through the kidney (1).

We put forward a hypothesis that hypomagnesemia in chronic diseases is primarily due to a Western type diet which is high in carbohydrates while its normalization is due to the shift from carbohydrate based to fat based metabolism. This assumption may be supported by the known connection between the metabolism of glucose and magnesium at the cellular level (32). First, magnesium is critically involved in enzymatic reactions involved in glycolysis, the initial step of glucose catabolism (33). Besides this, several enzymes involved in the transformation of carbohydrates and glucose intermediates also depend on magnesium (33). At the same time, apart from an initial activation step, there is no need for magnesium in the enzymatic steps of the beta oxidation of fatty acids (33). Insulin is also known to stimulate intracellular magnesium accumulation whereby decreasing extracellular magnesium level (32), possibly a reflection of increased intracellular need for magnesium of a glucose-based metabolism. The reported gradual inverse association between serum glucose and magnesium levels in type 2 diabetes patients is also in line with this (2). An inverse relationship between glucose and magnesium levels was also demonstrated in our sample on the paleolithic ketogenic diet. Of note, hyperglycemia has also been shown to increase renal magnesium clearance possibly contributing to magnesium loss (34).

Muscle cramps are generally attributed to a low level of magnesium (2). Feedback from patients/subjects on the paleolithic ketogenic diet consistently indicate cessation of muscle cramps upon diet initiation. Yet muscle cramps may reoccur following a dietary mistake of excessive intake of carbohydrates, especially fruits. Patients/subjects report that muscle cramps resolve following a return to the consumption of only animal fat and meat. These clinical observations combined with the above biochemical facts suggest that magnesium deficiency, either temporary or long-standing, may be relative rather than absolute and may result from a compartmental shift of magnesium from extracellular to intracellular spaces.

Despite the fact that meats, offal and fat contain lower amounts of magnesium as compared to most vegetables and grains, it seems that a diet based on animal meat, fat and offal ensures normal magnesium levels. A possible explanation for this is that not only the actual amount of magnesium matters but the composition of diet as a whole. First, a meat-fat-offal based diet restricting fruits and vegetables that contain high amounts of dietary fibers, phytates and oxalates, and which are known to hinder magnesium absorption, may explain how a diet relatively low in magnesium may still ensure normal magnesium levels (1). Second, as discussed above, the compartmentalization shift of magnesium between the extracellular and intracellular spaces driven by glucose might explain normal magnesium levels on a low carbohydrate diet.

Although magnesium is among the most popular supplements worldwide, they do not seem to be beneficial in a range of clinical conditions as assessed by meta-analyses (9,10,12). Given that the paleolithic ketogenic normalizes magnesium levels, we advise against taking it as a supplement when on the diet.

Keeping in mind the complexity of biochemical processes, it is not surprising that an essential micronutrient in its isolated form may not confer those benefits that can be achieved when obtaining them from their natural food sources. This may, however, be realized within the frames of the human evolutionary adapted diet (13).

The authors received no funds.