The objective of this study was to investigate the relation between habitual milk and dairy consumption and brain morphology as assessed by magnetic resonance imaging (MRI) investigations in 119 young healthy university students. MRI measurements were performed on a Siemens Magnetom Trio Tim (3 T) system while Freesurfer software suite was used for volumetric segmentation. Dietary habits related to milk and dairy consumption were assessed by a structured questionnaire. Total cerebral cortex, total cerebral white matter and total cerebral parenchyma were significantly related with cottage cheese and total protein intake from milk and dairy also when controlled for age and gender in the multivariate model. Our results indicate that dietary habits related with milk and dairy are proportionally associated with volumes of both cerebral cortex and cerebral white matter.

Structure and function of human brain is thought to be influenced by dietary factors (Gómez-Pinilla, 2008). Several neurological conditions including dementia were suggested to result from carbohydrate overconsumption, lack of essential fatty acids and shortage of vitamins (Gómez-Pinilla, 2008). From an evolutionary perspective, cow’s milk is relatively new in human nutrition (Cordain et al., 2005). In addition, consumption of milk, a cheap source of protein, has increased over the past few decades (Melnik et al., 2012). There are indications that cow’s milk and dairy are implicated in pathological conditions, including type 1 diabetes (Gerstein, 1994), insulin resistance (Melnik et al., 2013) and certain forms of cancer (Melnik et al., 2012). Cow’s milk consumption has consistently been related to accelerated growth in children (Hoppe et al., 2006; Thorsdottir and Thorisdottir, 2011). Growth promoting effect was suggested to result from proteins in cow’s milk such as the insulin like growth factor (IGF-1). We hypothesized that consumption of cow’s milk and dairy may also affect brain structure. To assess this we designed a study to investigate the relation between habitual milk and dairy consumption and brain morphology as assessed by magnetic resonance imaging (MRI) investigations in young healthy university students.

Subjects
One hundred nineteen (48 males and 71 females) healthy university students between the ages of 18 and 30 were recruited through advertisements placed on notice boards at the University of Pécs, Hungary. Subjects were free of brain disorders, drug or alcohol abuse. Subjects underwent MRI measurements and filled out a set of questionnaire assessing psychological sphere and life style including habitual food intake with a special emphases on milk and dairy products. The study was approved by the local ethical committee of the University of Pécs and all subjects gave written informed consent.

MRI data post processing
Freesurfer 4.5.0 software suite was used for cortical reconstruction and volumetric segmentation of the images (http://surfer.nmr.mgh.harvard.edu/). Freesurfer software can be used for reliable automated brain segmentation for structures and allows us to assess the volume of the pre-defined brain structures. Freesurfer’s semi-automatic anatomical processing
steps were executed on all subjects’ data including removal of the non-brain tissue, the automated Talairach transformation, volumetric segmentation, intensity normalization, tessellation of borders between the grey matter and white matter surfaces and using intensity gradients to localize the grey matter, white matter, and fluid boundaries. Accuracy of the Talairach transformation, skull strip, white matter and pial surfaces and subcortical segmentation were visually checked in case of every subject after each script. Error correction was applied where it was necessary. The final segmentation is based on a probabilistic atlas and the subject-specific measured values. The following structures were used for statistical analysis: total intracranial volume (ICV), total cerebral white matter (TCWM), the left hemisphere cortical grey matter and right hemisphere cortical grey matter summarized as total cerebral cortex (TCC), total ventricular volume (TVV) which was the sum of the left and right lateral ventricle, left and right inferior lateral ventricle, third and fourth ventricles. Additionally we calculated total cerebral parenchyma (TCP) which was a sum of TCWM and TCC.

Milk-dairy questionnaire
Dietary habits related to milk and dairy consumption were assessed by a structured questionnaire. This questionnaire addressed the following items: full fat milk, reduced fat milk, skimmed milk, soft cheese, semi-hard cheese, hard cheese, cottage cheese, yoghurt, kefir and sour cream. Subjects were asked about how often a particular item was consumed. When answering this subjects had to choose one of the following options: “never”, “less than once a month”, “once a month”, “a few times a month”, “once a week”, “a few times a week”, “once a day”, “a few times a day”. Subjects also had to estimate the weight/volume of the particular items consumed at one occasion.

Milk-dairy estimates
First frequency answers were transformed to weekly frequency estimates such that the eight consecutive categories from “never” to “a few times a day” were transformed to the following numbers: 0, 0.125, 0.25, 0.625, 1, 4, 7 and 14. Then these weekly frequency estimates were multiplied with the reported average weight (or volume) of each item to assess total weekly intake of a particular item. Weekly milk consumption was calculated as a sum of full fat milk, reduced fat milk and skimmed milk while weekly cheese consumption was calculated as a sum of consumption of soft, semi-hard and hard cheese. To create a proxy for total intake of milk and dairy, total milk-dairy protein intake was calculated. Total milk-dairy protein intake was calculated by summing up protein contained by the weekly weight estimates of milk-dairy items. In doing this we calculated with the following protein data: milk (all three types): 3 g/1dl, soft cheese: 1.79 g/10 g, semi-hard cheese: 2.5g/10 g, hard cheese: 2.8 g/10 g, cottage cheese: 1.62 g/10 g, sour crème: 0.28 g/ 10 g, yogurt: 0.3g/10 g, kefir: 0.3g/10 g. The reason for choosing the measure of total protein intake was that milk and dairy products largely differ in their water content thus summing up weight of different dairy types would not be appropriate. A second reason for this was that physiological effects of milk-dairy products are thought to be mediated through the protein found in milk and dairy (Melnik et al., 2012).

Statistical analyses
Data analysis was performed using SPSS statistical software ® version 19.0 (SPSS, Inc., Chicago, IL). First Pearson correlation coefficients were calculated between MRI measurements and milk-dairy parameters. In a second step we controlled for the effect of age and gender in these correlations such that we created separate multiple linear regression models for parameter pairs that were revealed to be significant in the bivariate analysis. The assumptions of multiple linear regressions were satisfied, as judged by testing for linearity, normality assumptions of the residues, outliers, independence of errors, homoscedasticity, and multi-collinearity (Chan, 2004). 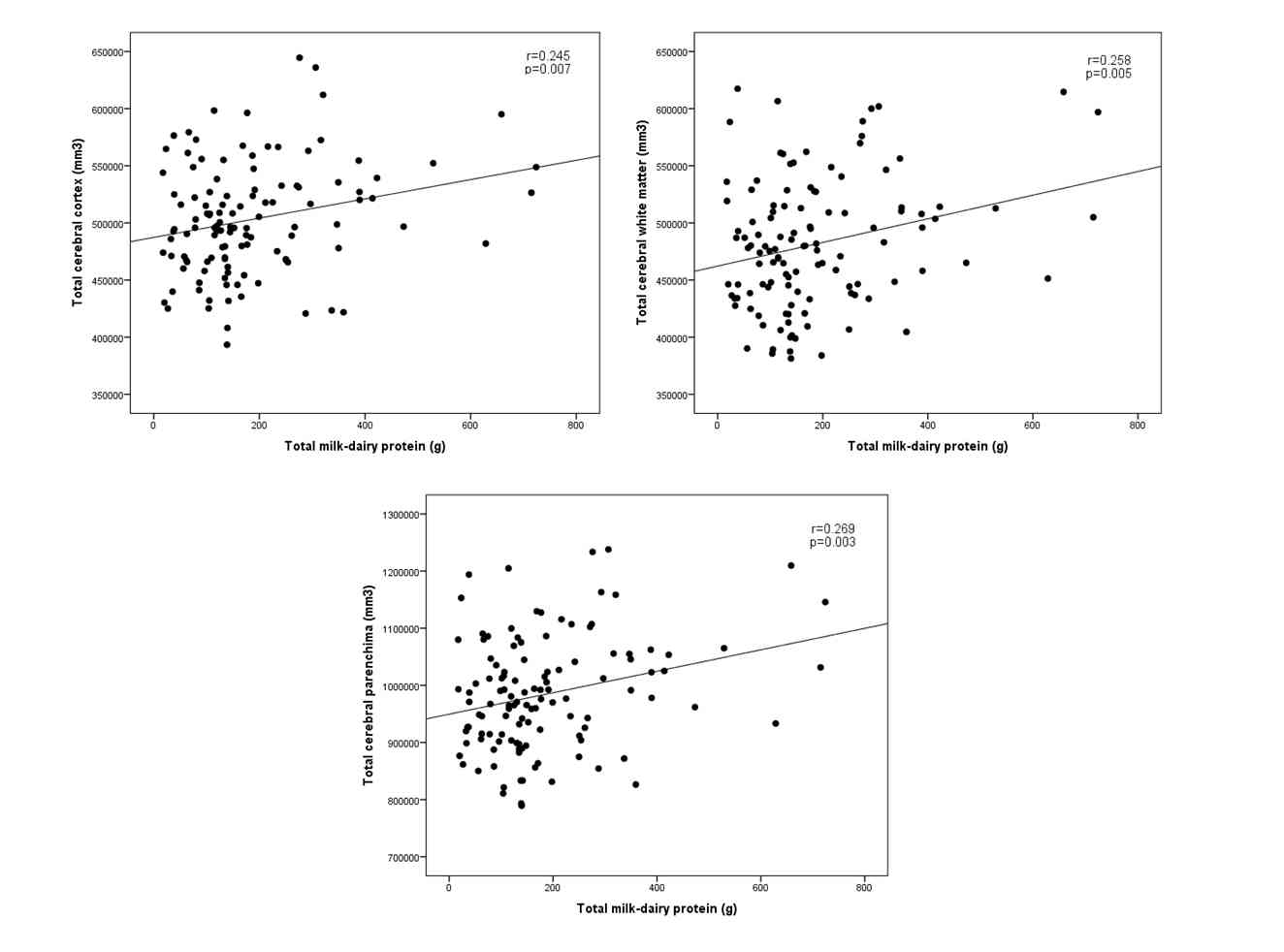 Figure 1
Scatterplot representing the relationship between weekly milk-dairy protein intake and the respective brain volumes. All three correlations remained significant after correction for gender and age.

As far as we know this is the first study assessing the relationship between cow’s milk-dairy consumption and brain morphology. We found a number of associations between milk and dairy consumption and the investigated brain volumes. TCC, TCWM and TCP were significantly related with cottage cheese and total protein intake from milk and dairy also when controlled for age and gender in the multivariate model. Cheese consumption was significantly correlated with all three brain parameters although they turned non-significant in multivariate models.

Milk of mammalian animals is evolutionarily “designed” to promote growth of the offspring. Accordingly, breastfeeding has repeatedly been shown to confer health and cognitive benefits in later life. For example a study by Isaacs et al. (2010) reported a positive association between early breastmilk intake and brain volume as well as intelligence quotient at adolescence. Contrary to the usual belief, consumption of milk beyond breastfeeding period is associated with negative health effects too. These include iron deficiency, higher prevalence of upper respiratory tract infections, allergies, constipation and type 1 diabetes mellitus (Thorsdottir and Thorisdottir, 2011). Epidemiological and ecological data also link cow’s milk consumption to higher prevalence of certain cancers (Melnik et al., 2012) and cardiovascular disease (Laugesen and Elliott, 2003). A few studies also related cow’s milk to neurological conditions such as epilepsy, autism and sudden infant death (Thorsdottir and Thorisdottir, 2011; Lucarelli et al., 2012).

Negative effects are thought to be mediated by the bioactive substances in cow’s milk. Casein which makes up 80% of the protein in cow’s milk breaks down in the gastrointestinal tract into casomorphins such as beta casomorphin-7 (BCM-7). BCM-7 is prone to passing through the blood-brain barrier and has been suggested to exert an opioid-like effect in the central nervous system (Scientific Report of EFSA, 2009). Although this effect was described as being weak continuous exposure may represent a cumulative effect.

Cow’s milk contains IGF-1 and consumption of cow’s milk is known to elevate concentration of both IGF-1 and insulin which are regarded as key regulators of tissue growth (Melnik et al., 2012). The two latter factors together with leucine, an amino acid from milk and dairy, are known as main activating factors of the mTORC1 (mammalian/mechanistic target of rapamycin complex 1)-signaling system which promote cell growth and proliferation but inhibit apoptosis (Melnik et al., 2012).

The link between accelerated growth and cow’s milk consumption is well-established in children (Hoppe et al., 2006; Thorsdottir and Thorisdottir, 2011). Here we report that volumes of the cerebral cortex and cerebral white matter are proportionally related to milk and dairy consumption in healthy young adults. Given that the associations were strongest for milk-dairy protein, which is a summated measure of milk-dairy consumption, we suggest that the effects coming from different types of dairy are summated. Among the investigated dairy types cheese and cottage cheese were found to exhibit highest correlation measures with the brain subvolumes. This may be due to the fact that cheese and cottage cheese have the highest dry matter content and thus contains most protein with a potential biological effect. When investigating males and females separately associations were stronger for males than females, despite the smaller group size of males than females. Such a gender difference is in line with results from previous studies indicating stronger associations for males than females between milk consumption and height in children (Rogers et al., 2006) as well as breast milk intake at infancy and brain volume at adolescence (Isaacs et al., 2010).

Generally, larger brain is regarded as a positive rather than negative feature (e.g. Witelson et al., 2006). At the same time, autistic children (Hazlett et al., 2011) and patients with schizophrenia (Bassett et al., 1996) have been reported to have larger head circumference than age matched controls and brain overgrowth has been implicated in the pathology of these conditions (Hazlett et al., 2011). It is of importance too, that dietary interventions in autism rely on eliminating milk and dairy besides gluten containing foods (Elder, 2008).

In our previous study intracranial volume was inversely related with vitamin D (Plózer et al., 2014) the low serum level of which is a correlate or predictor of a wide variety of neurological and psychiatric conditions (Balion et al., 2012; Evatt et al., 2008; Holló et al., 2014). Vitamin D deficiency has been shown to promote cellular proliferation in the nervous system (Ko et al., 2004). Vitamin D is also implicated in the mTOR signaling by suppressing its activity (Lisse and Hewison, 2011). It seems that higher milk consumption and low level of vitamin D, converge in activating a common signaling pathway, and both are associated with tissue growth (Ko et al., 2004; Melnik et al., 2012) and larger brain volume as indicated by our previous (Plózer et al., 2014) and present data.

Our results indicate that dietary habits related with milk and dairy are proportionally associated with volumes of both cerebral cortex and cerebral white matter. Functional consequence of milk- and dairy-associated growth in brain parenchyma remains to be elucidated.