Introduction: Prognosis for patients with high-grade brain tumor is poor and survival did neither substantially change with advances in chemotherapy, radiotherapy and molecular profiling. Ketogenic diets have been suggested as a promising alternative therapy. However, group studies in cancer patients with the classical ketogenic diet so far provided little or no evidence that the classical ketogenic diet is indeed beneficial in terms of prolonging survival. Results: Here we present three cases: one patient with grade 3 brain tumor, (pat #1: anaplastic oligodendroglioma) and two patients with grade 4 brain tumor (pat #2: recurrent glioblastoma; pat #3: new-onset glioblastoma). The three patients were started on the strickest form of the paleolithic ketogenic diet (PKD): the full meat-fat diet. At the time of diet onset all three patients refused chemotherapy and radiotherapy and did neither use any dietary supplements nor standard medications. They all strictly adhered to the diet and were in constant ketosis. Pat #1, who was overweight at diet onset, lost 25 kg on the diet during the first nine months of the diet. During this time tumor size was relatively stable. Later on tumor size gradually increased which was preceded by a gradual increase in food intake without affecting ketosis. Along with this inflammatory parameters increased as well. The patient was advised to decrease food intake and subsequently, inflammatory parameters decreased again. In pat #2, in addition to recurrent glioblastoma, past history also included bladder cancer. Despite surgery and radiochemotherapy, his brain tumor recurred. Upon recurrence, the patient stopped radiochemotherapy and started the PKD as a stand-alone therapy. Currently, the patient is on the diet for 14 months and is progression-free. Pat #3 had a stable tumor size for the first two months of the diet when he used the diet as a stand-alone therapy. Then, despite being progression-free and having no symptoms at all, the patient decided to have radiotherapy. Although we advised against, he also started taking multiple supplements and began hyperbaric oxygen therapy. From this time on his disease progressed and the patient died at 11 months. Conclusions: The two patients using the PKD as a stand-alone therapy are still alive at 25 and 14 months while the third patient after starting additional therapies experienced progression and died.

INTRODUCTION: Ketogenic diets have been long suggested as a promising cancer therapy. However, clinical studies with the classical ketogenic diet so far provided little evidence that it is indeed beneficial in prolonging survival.

METHOD: We use the paleolithic ketogenic diet (PKD) in the treatment of chronic diseases including cancer. The PKD is a meat-fat-based diet similar to that originally proposed by Voegtin in 1975. Here, we present follow-up data for patients with high-grade brain cancer treated with the PKD. Pat#1 was diagnosed with grade 3 while pat#2 and pat#3 with grade 4 brain tumor. Pat#2 started the diet following the recurrence of his tumor despite surgery and radiochemotherapy. Pat#1 was deemed to be inoperable while pat#3 underwent surgery shortly after diagnosis onset.

RESULTS: All three patients were on a full meat-fat diet with a high level of adherence also evidenced by laboratory parameters. Two patients (pat#1 and pat#2) had been using the diet as a stand-alone therapy during the entire follow-up. Pat#3 received radiotherapy only for four weeks while on the diet. Pat#1 remained stable for nine months, then progression followed. Progression was preceded with a gradual increase in food intake, reintroduction of coffee and tiny amounts of alcohol. We suggested stopping drinking coffee and decreasing food intake. Along with this, his inflammatory markers decreased. Pat#2 remained stable for the entire follow-up. Pat#3 used the diet as a stand-alone therapy for the first two months and remained stable for this period. Later on, he received radiochemotherapy, steroids and was also using hyperbaric oxygen therapy and dietary supplements. Using these additional therapies was then associated with progression, increasing inflammatory markers, and the patient died at 11 months after diet onset. 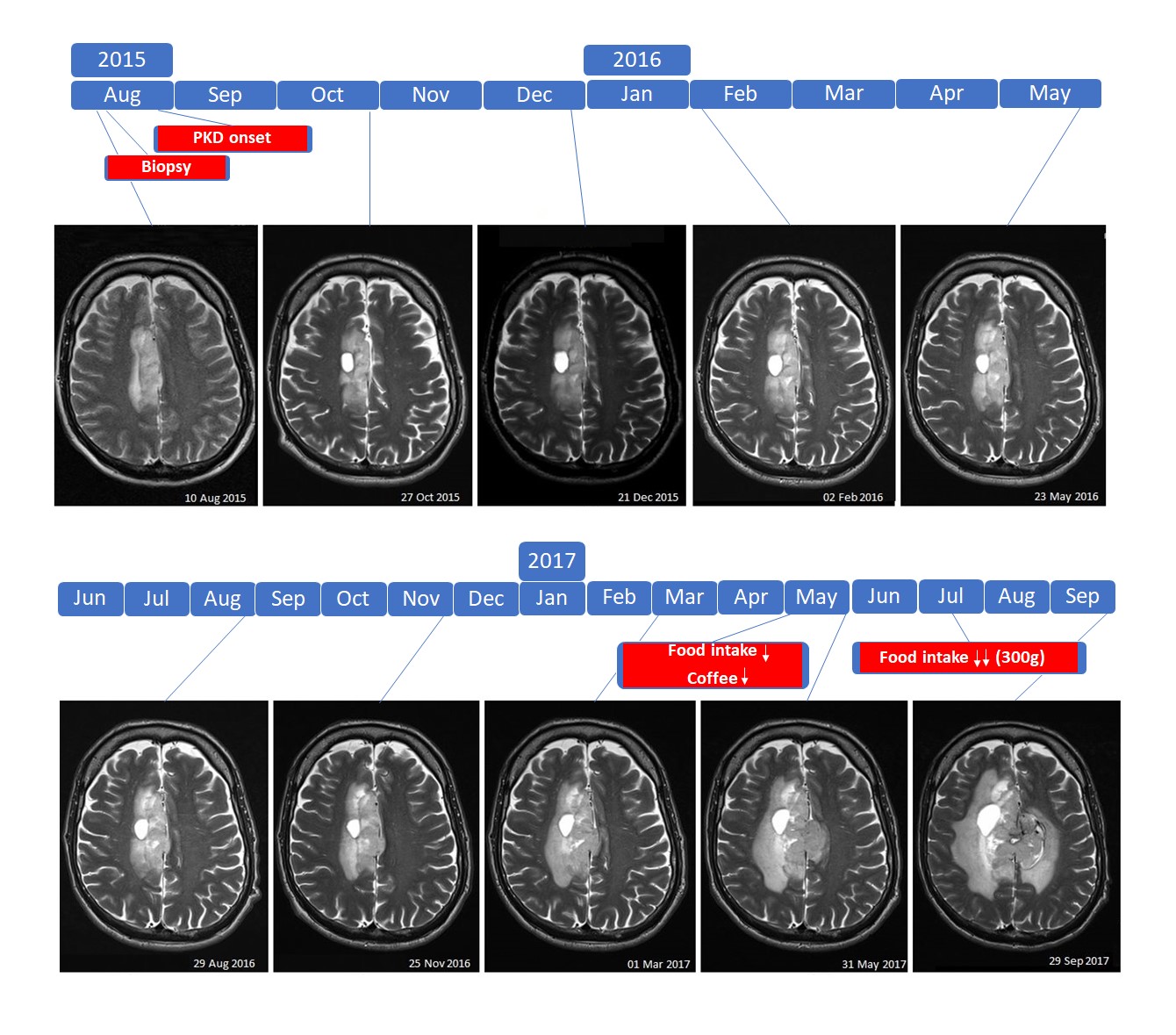 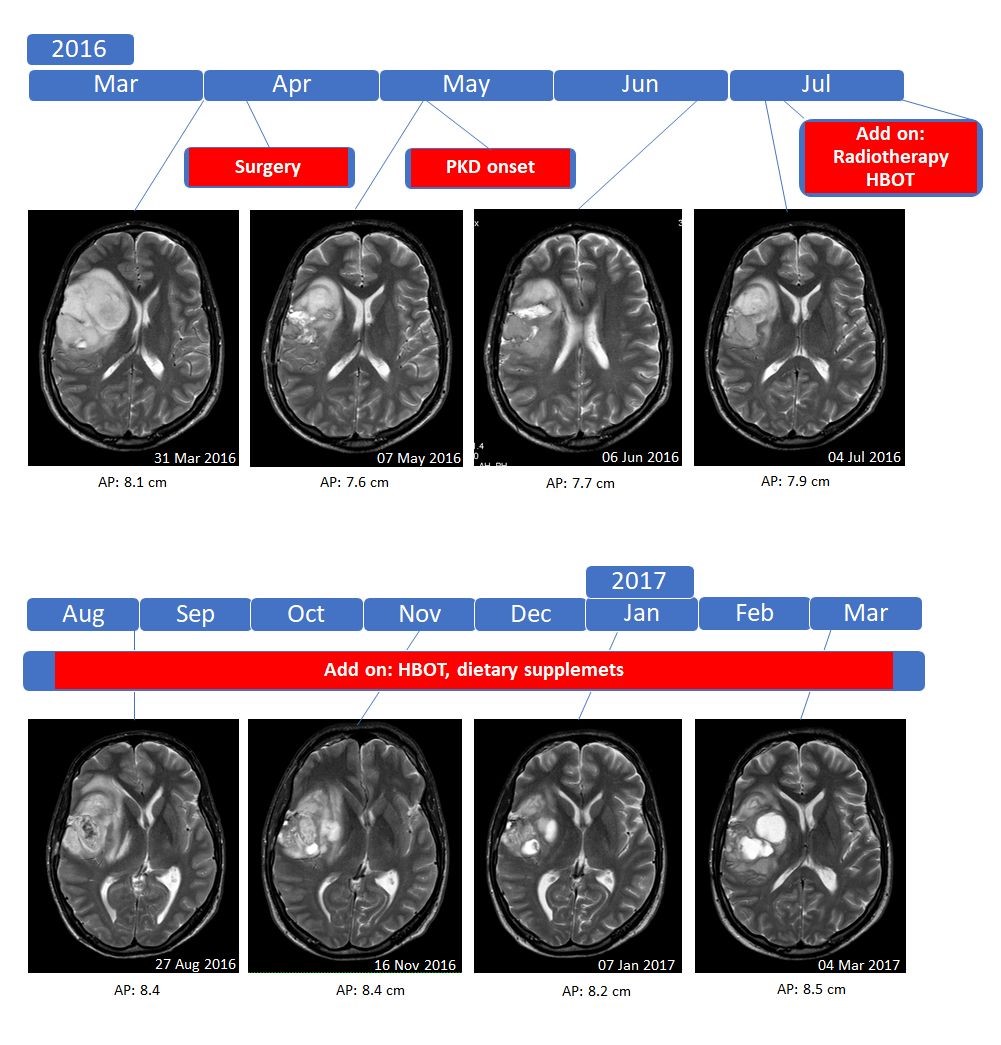 CONCLUSIONS: The two patients (pat#1 and pat#2) who used the PKD as a stand-alone therapy are still alive at 25 and 14 months after diet onset. Pat#2, who had the worst initial outlook (recurrent glioblastoma and a past history of bladder cancer), but well-controlled the amount of food, is progression-free and symptom-free for 14 months. Pat#3 was also progression-free and symptom-free so far the diet was used as a stand-alone therapy. After receiving radiotherapy, steroid and ”alternative” treatments his condition progressed.