The objective of this study was to examine the relationship between verbal memory and total cholesterol (TC) levels related to body mass index (BMI) in healthy young women. Verbal memory was assessed using the Rey Auditory-Verbal Learning Test (RAVLT) while total serum cholesterol was measured by enzymatic colorimetric test. In order to analyze the potential significance of BMI subjects were divided into three groups according to their calculated BMI percentile values. No significant correlation was found when assessing the group as a whole. However a remarkable pattern of correlation emerged when assessing the BMI groups separately: a close-to-significant positive correlation was found for total learning score and TC in the low BMI group, no correlation emerged in the medium BMI group while a strong inverse correlation was found in the high BMI group. These findings indicate that the relationship between verbal memory and serum TC level is also influenced by BMI.

1.Introduction
Cholesterol has multiple functions in the brain including forming and maintaining efficient syn-apses, determining biophysical properties of cell membranes, acting as a co-factor in trans-membrane signaling and it is also a precursor of neurosteroids including vitamin D1. Cholesterol pools within and outside the nervous system are not directly interchangeable. However oxyster-ols, oxygenated derivates of cholesterol, may cross the blood brain barrier and link the metabo-lism of the two cholesterol pools2. Currently there is much debate how cholesterol is implicated in physiological and pathological functions of the brain. Both low3-5 and high6-8 TC levels have been linked with cognitive impairment. The relationship between cholesterol and cognition also chang-es as a function of age9. In elderly most studies indicate a positive association between cholester-ol and cognitive functioning3,4,10 while results are mixed for middle-aged11,12. Nevertheless mid-life hypercholesterinaemia as well as a decline in cholesterol levels through midlife have consist-ently been shown to predict cognitive impairment and increased risk for dementia in late life13,14. There are only a few studies assessing the association between cholesterol and cognition in young age. A study by Perry, Stigger, Ainsworth, and Zhang15 reported no correlation between academic performance and cognitive level at school-aged children. Another study in undergraduates indi-cated the speed of mental processing to be linearly related to cholesterol levels in women but not in men16. Elevated cholesterol correlates with several systemic disorders. For example, compo-nents of the metabolic syndrome including high body mass index (BMI), high blood pressure, high blood glucose levels are typically associated with elevated cholesterol as well as deteriora-tion of cognitive performance and other neurological functions17. This aspect, however, is typical-ly not taken into account when assessing the relation between cholesterol and memory in cross-sectional studies. Here we designed a study to assess the relationship between cholesterol and verbal memory and referred the data to BMI in healthy young women.

2. Methods
2.1. Participants
Fifty-six non-obese (BMI<25), healthy women aged between 18 and 30 (mean ± SD: 22.7 ± 2.0 years) were included. Volunteers were recruited through advertisements placed on notice boards. Four subjects were excluded from the study because of chronic illnesses and neurological or psychiatric symptoms revealed by I. Self-evaluation questionnaires (STAI – State-Trait Anxiety Inventory and BDI – Beck Depression Inventory); II. Visual check of white matter lesions on structural MRI images (MPRAGE); III. Direct question in our lifestyle questionnaire (Do you suffer from any chronical illness? If yes, please specify them). Subjects were also controlled for eating disorders by the 64-item EDI (Eating Disorders Questionnaire). None of them reached the clinical range. Because stimulants have great impact on the performance on memory tasks subjects were asked not to eat or drink any alcoholic or caffeinated beverages on the day the study was conducted. The Local Ethical Committee approved the study and written informed consent was obtained from all participants.

2.2.2. Rey Auditory-Verbal Learning Test
The Rey Auditory-Verbal Learning Test (RAVLT) measures recent memory and verbal learning. It is a fast and straightforward test to administer, and its use has been widely recognized by the neuropsychological literature. The test was administered according to its original standards18. A list of 15 substantives (list A) is read aloud to the subject five consecutive times (attempts A1-A5). Each of the attempts is followed by a test of spontaneous retrieval. After the fifth attempt, a list of interference, also comprising 15 substantives (list B) is read to the subject, followed by its retrieval. After attempt B1, the examiner asks the individual to recall the words from list A, without reading it again (attempt A6). After a 30-minute interval, the examiner asks the individual to remember the words from list A (attempt A7) without reading this list.

The following measures were analyzed in the present study:
1. Trial A1, A2, A3, A4, A5, A6, A7, B1 - the number of correctly recalled words in each of these learning trials.
2. Total Learning (TL) - the total number of correctly recalled words over the first five learning trials (sum of A1 to A5).
2.2.3. Body Mass Index
Participants filled out an anonymous questionnaire package including items about height and weight. Body mass index (BMI) was calculated as weight in kilograms divided by the square of height in meters. Subjects were divided into three groups according to their calculated BMI percentile values: low BMI group (BMI<33th percentile), medium BMI group (BMI>33th percentile and <66th percentile) and high BMI group (BMI>66 percentile). For descriptive statistics see Table 1.

Table 1. Summary of descriptive statistics in the three BMI subgroups.

2.2.4. Statistical Analysis
Statistical analysis was performed using SPSS 20.0 software (SPSS Inc, Chicago, IL). The level of significance was set at p < 0.05. As total level of cholesterol and BMI followed normal distribution, Pearson correlation analysis was performed. To compare groups for total level of cholesterol, one-way ANOVA was used. As distribution of most RAVLT parameters (A1, A2, A3, A4, A5, A6, A7, TL) significantly differed from normal distribution, non-parametric Spearman rank correlation tests were used for calculating correlations. Results are presented as correlation coefficient (r) and p values.

3.2. Analyses in the BMI subgroups
ANOVA indicated no significant differences between the three BMI groups in the total level of cholesterol (F= 2.499; p=0.92). Analysis of the BMI groups separately for the correlation between cholesterol level and RAVLT scores revealed that in the low BMI group eight RAVLT parameters (of the nine) were positively related to TC with one parameter (A2) being significant. In the medium BMI group three positive and six negative correlations were observed with none of them reaching significance. In the high BMI group all nine correlations were inverse and five of them also reached significance (A1, A2, A3, A4, TL). The TL score, which as a summated score can be regarded as the most reliable measure, was similarly associated with TC in the three BMI groups: in the low BMI group the relationship was marginally insignificantly positive (r=0.426; p=0.069), there was no correlation in the medium BMI group (r=0.018; p=0.945) while the relationship was highly significantly negative in the high BMI group (r= -0.647; p<0.01). For all correlation coefficients see Table 2. 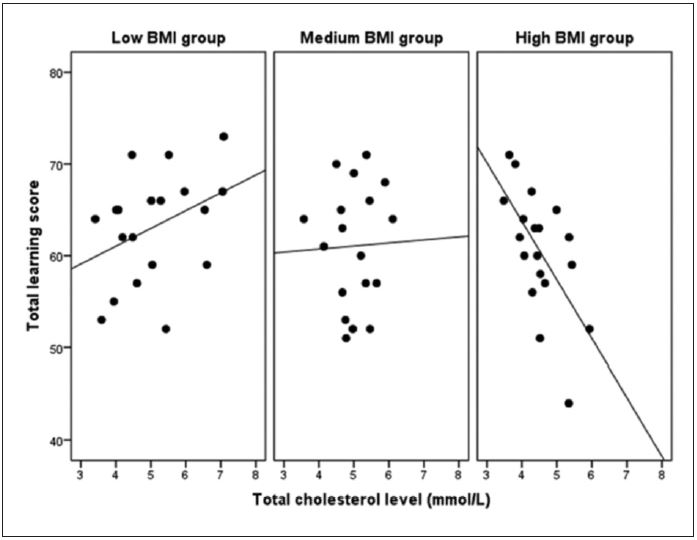 Figure 1. Scatterplots representing the relationship between TC and total learning score in the three BMI subgroups. Total Learning scores were assessed as the summation of the correctly recalled words over the first five trials.

4. Discussion
To our knowledge, this is the first study exploring the relationship between total level of cholesterol and verbal memory in healthy young women also considering the effect of BMI. We found no significant correlation between cholesterol level and measures of verbal memory when analyzing the subject group as a whole. However correlation analysis carried out for the three BMI subgroups separately revealed a remarkable pattern of correlations with a positive correlation for total learning score close to significance in the low BMI group, no correlation in the medium BMI group and a strong inverse correlation in the high BMI group. A similar trend was noticed for the single RAVLT scores.
Cholesterol is essential to develop normal structure and proper functioning of the nervous system (fluidity of cell membranes, membrane permeability, transmembrane exchange, signal transmission etc.)19. Low level of naturally occurring cholesterol has been reported to be associated with a deterioration of neurological function including depression and suicide 20 as well as aggressive behavior21. In some studies treatment with cholesterol-lowering drugs has also been reported to impair neurological functions11. Although central and peripherial cholesterol pools are not directly interchangeable, research in animals including nonhuman primates, suggests that circulating cholesterol may impact learning and memory, leading to speculations about the role of cholesterol, oxysterols and a range of other cholesterol-related molecules22. Cholesterol also acts as a precursor for the synthesis of vitamin D, a steroid hormone with diverse roles in the nervous system23. Several studies have shown that low level of vitamin D is associated with poorer learning performance24,25. Thus decreased availability of cholesterol for vitamin D synthesis may be a factor contributing to detrimental effects of suboptimal serum cholesterol.
Our data extends previous research on cholesterol and memory in showing that the relationship of these two is also influenced by BMI. Although BMI<25 is usually regarded as normal there are indications that different values within this range carry different risk for a variety of pathological conditions. For example, in women a BMI of 25 represent more than 5-fold risk for type 2 diabetes as compared to BMI lower than 2126. Similar results were obtained for cancer27 and neurological conditions including Alzheimer disease28. Given these striking differences it is worth evaluating this factor by creating subcategories within the non-obese BMI range. In our low BMI group, which thus can be regarded as the most “healthy” group, cholesterol tended to correlate positively with verbal memory indicating a possible positive effect of cholesterol on memory. Alternatively, high cholesterol can be regarded as an indicator of optimal cognitive functioning including superior verbal memory. In the high BMI group, on the contrary, cholesterol and verbal memory correlated inversely. It is reasonable to suppose that subjects in this group can be characterized by borderline metabolic syndrome where elevated cholesterol correlating with this underlying condition. Metabolic syndrome itself is also known to be associated with worse cognition17 and therefore elevated cholesterol which may designate the severity of this condition may be an indicator of worse verbal memory too.
A potential limitation of our study is that we did not enquire about diet habits and weight-reduction intentions. These factors may have notable influence on cholesterol level and cognitive performance.

5. Conclusion
In conclusion, our results indicate that cholesterol and verbal memory are linked differently in the low and high BMI groups. The different linkage can be explained parsimoniously by implying borderline metabolic syndrome and associated features coupled to larger BMI. Mixed results obtained in previous studies may also be explained by disregarding BMI when assessing the relationship between cholesterol and cognition.